A Series of Unfortunate Events: A Comparison between the Books, Movie, and Netflix Series Plus Reviews 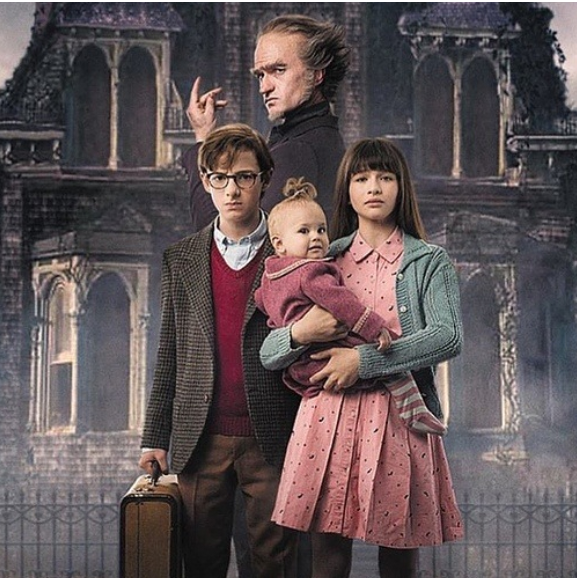 The Series of Unfortunate Events by Daniel Handler, also known as Lemony Snicket, is a story about 3 siblings from the Baudelaire family – Violet, Klaus, and Sunny. The three children are orphaned after their wealthy parents perish in a fire. Because of this, the three siblings are sent to live with a bizarre cast of characters, ranging from a wealthy socialite and a reptile scientist to a grammar teacher who’s afraid of anything and everything, and a fiddle-playing academy principal forces them to live with a cabin of slugs. As they jump from house to house, disaster follows them in the form of Count Olaf, a failing actor who is determined to get his hands on the Baudelaires’ fortune, which they will inherit when Violet, the oldest sibling, turns eighteen. The book was a success, having sold nearly 20 million copies around the world; and there is both a TV show and movie based on the books. In this article, we’ll be reviewing all three of these media pieces and rating them.
The Books
The Series of Unfortunate Events released its first book on September 30, 1999. Now, the series comprises 13 books, not counting the extra sequels and prequels. The first book is known as “The Bad Beginning,” the story initiates the journey and introduces the main characters. Overall, I would recommend this book because it is humorous and witty techniques used by the author, Daniel Handler (known under the pen name Lemony Snicket) that allow the book to be 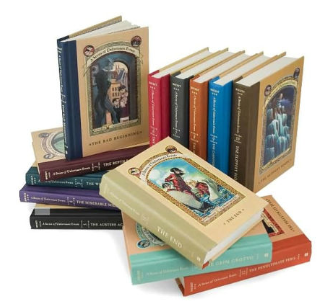 interesting. Along with the Bad Beginning, Lemony Snicket has made 13 other books that are all as well-written and interesting. No book seems lazy or unfinished and each book brings its twist in unexpected ways. The audio versions of the book are also wonderful – they act and the amount of detail they use while explaining is so strong it makes you feel like you’re one of the characters in the book. It’s a mesmerizing experience.

Before I begin to rate the books, let’s go deeper into the plot. What exactly is the Series of Unfortunate Events about? Well, the most basic description is that it’s about the misadventures the three Baudelaire siblings go through after their parents’ deaths as they jump from their relatives’ homes, which is complicated by the fact that a failing actor known as Count Olaf is determined to get their considerable inheritance to himself. The beginning of the series chronicles the Baudelaires as they jump from home to home, trying to avoid Count Olaf and find the truth about their parents and the secret society they were in. After the Vile Village, they are forced to live on their own after being accused of murder, where they try to discover the true purpose of the secret society their parents were in. Along with the positive aspects of the books, there are also 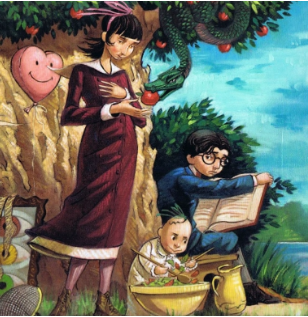 some negative aspects. First, the plot sometimes may seem a little too simple and formulaic. Another thing is these books are very tragic – source material often discusses a variety of dark topics, such as grief and loss, which can make it difficult to watch for some viewers. The books have also been controversial due to the disturbing material in the books, such as graphic descriptions of particularly violent scenes, namely when the siblings found the body of their first caregiver. However, despite these things, it’s still a very good book series.

To conclude, The Series of Unfortunate Events is a great series that will keep you hooked and entertained for a good month or so. These books can be found anywhere and are definitely worth the read, so if you have the opportunity to, go read it! It’s definitely worth your time.
The Series
11 years after Lemony Snicket released his chronicles, another series was released in 2017 adapting the books and movies. The series has more characters and simpler story plots. The movie series compares with the books and movies by having the same basic plot: the three main characters being Violet, the oldest sibling about to come of age; Klaus, the middle child, and a young engineer; and Sunny: the youngest child and an intelligent, strong toddler.

For instance, the story is not told entirely from the three characters Violet, Klaus, and Sunny’s point of view but is told from the view of characters like Lemony Snicket, the narrator of the story. Unlike the book and the story, Lemony Snicket holds an important role in the story, with him being the sibling of two very important characters, Jacques and Kit Snicket. The movie also provides a deeper backstory of Lemony Snicket, a previous secret agent and man on the lam faking his death.
The series additionally reveals several mysteries, while others are left hidden throughout the story and even in the end. The series itself doesn’t finish with a concrete ending even with 3 seasons but ends with a resolution that the kids and even the narrator are happy to achieve. Although maintaining its professionally mysterious structure, the series contains a comical side to it, with

the main antagonist and the Baudelaire’s supposed uncle Count Olaf dressing in humorous disguises and intriguing the audience with his vague logic and hilarious energy. His assistants are also given more detailed, important roles.
The series is great, for the most part – the characters are complex and multi-faceted, the visuals and sound design are beautiful and very detailed, and as I said before, the plot is extremely entertaining; filled with memorable moments and plot twists and composed of unique and charming characters and settings. Lemony Snicket’s narration style was particularly memorable – I haven’t seen anything quite like it in any other series. Throughout the story, Snicket is omnipresent, which adds to the unique charm and helps make the story seem more interactive. I honestly don’t have any complaints with the series – it manages all of its content wonderfully and manages to link the stories in a way that makes it engaging and entertaining.
The Movie
In 2004, Nickelodeon Movies released a movie based on the first three books in the Series of Unfortunate Events chronicles, which starred Jim Carrey as Count Olaf and Liam Aiken, Emily Browning, and the twins Shelby and Kara Hoffman as Klaus, Violet, and Sunny Baudelaire 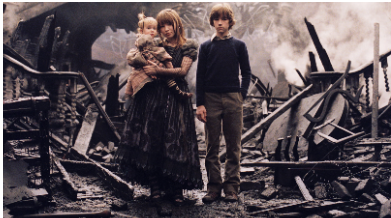 respectively. It was faithful to its source material in many ways – it incorporated most of the books’ events and characters, and there are a lot of similarities between the style and scene quality between the movie and the Netflix series. However, some of the secondary characters were omitted, disappointing some of the series’ fans, and its overall tone was significantly different from both the books and the movies. It’s also important to note that the book series only chronicles the first three installments of the series, severely limiting its span of content and the number of topics and important scenes the movie could visit.
Though the movie was a commercial success and was received well by critics thanks to its visuals and characters, many criticized the book’s hasty pacing and uncomfortable and over-comedic tone. Here is a short analysis of the positive and negative aspects of the movie.
For the most part, the movie accurately followed the events of the book and managed to include most of the cast of the characters, which helped add to adding to the feeling of authenticity to the movie. The costuming for the movie was also another positive aspect to note. The outfits of the characters served to add to the feeling of time-period ambiguity that the original book had. 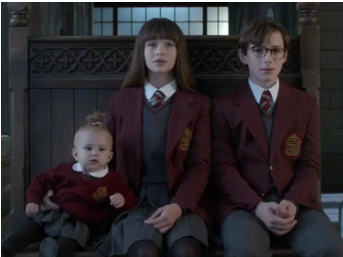 Additionally, the costumes were detailed and intricate; helping establish and uphold the somewhat mysterious tone of the movie. The majority of the dialogue has a witty quality to it, further enhancing its connection to the original book series. The scenes are well-shot and add to both the dramatic and comedic elements of the story by highlighting the intensity of the events of the moment and calling attention to the characters in the shot. The casting choices were also good, the actors of the three siblings especially were a good choice. They managed to execute their roles believably and entertainingly while incorporating their signature features from the book, such as Violet’s trusting nature and her mechanical aptitude. The sets are also a great part of the movie: they’re very detailed and are one of the major factors in cultivating the unique tone of the movie: one of my favorite examples of this is Count Olaf’s mansion, which is a fascinating mix both gaudy and squalid aspects: like the intricate, wealth-laden dining room right next to the kitchen, which is just a cramped room piled with dirty dishes. Overall, the movie succeeds by sticking to the book’s original plot points and conveying the visual and atmospheric setting.
However, the movie has its fair share of negative aspects as well. One of the big problems in the movie is its pacing. The movie doesn’t dawdle too long on proper transitions, with it jumping from topic to topic very fast. It’s sometimes hard to keep up with the stream of information being 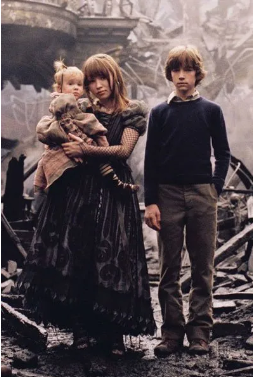 conveyed constantly. This makes it hard to keep track of the considerably large cast of characters and fully understand the various intricacies of the plot. It’s also received some backlash for its overtly comedic tone. While both the books and series were dramatic and suspenseful elements for the most part with just a bit of comedy, the movie takes it to the next level, with the majority of its content holding some sort of absurd quality to it. Along with this, the movie only has a few scenes of drama, mystery, suspense, or any of the darker genres that cropped up frequently in the books and series. Not only does this make it slightly disappointing, but the comedic quality of the story also comes off as very awkward and uncomfortable. Some of the jokes presented in the movie are downright nonsensical, while others have very poor execution and delivery. The acting itself sometimes feels overtly fake or forced, which of course adds to the awkward atmosphere that can crop up from time to time. Overall, the movie’s negative aspects include a poor comedic style and difficult pacing.
The Conclusion
In conclusion, Series of Unfortunate Events manages to be an entertaining, engrossing story in all of its media forms thanks to its unique cast of characters, well-designed setting, interesting plot, and mysterious atmosphere. The books, series, and movies all deserve a watch and all manage to incorporate common elements of the plot in their stories, helping connect each media piece to the other. All of them managed to be entertaining, and one way or the other managed to capture the unique essence of the original books while still adding to the detailed story.