Americanized Food: How Did We Go from Cultural to Colonized? 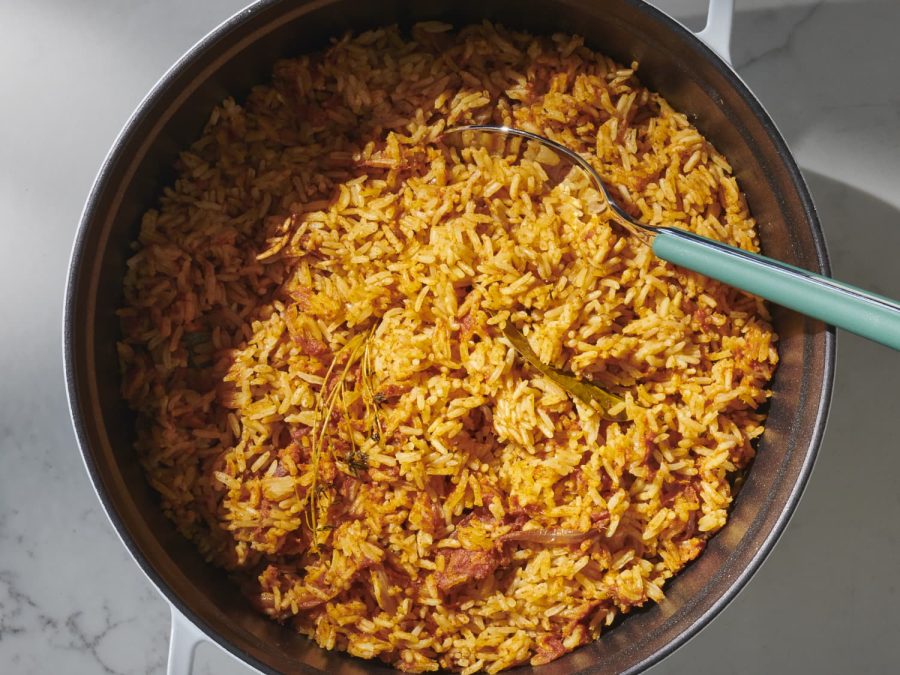 Jollof rice. For many, those two words spark many memories of good times, aromatic flavors, and parties. Jollof rice is a staple dish across West Africa with most countries all having a different way of preparing the dish. For some, it is customary to add vegetables, and for others, that is an appalling thought. These differences have also sparked the Jollof Rice Wars between these West African countries. However, you will most likely see Nigeria and Ghana disputing the most while the rest just sit back and watch.

The dish is named after the Wolof empire which existed from the 14th to the 16th century. It stretched across Senegal, The Gambia, and Mauritania. Rice farming exploded in regions near the coast and the Senegal river. Combined with trading done with Portuguese people and obtaining new items thieboudienne, a dish similar to Jollof, was born.

As a Nigerian, Jollof is a staple dish in my house. The way I know how to make it is to blend tomatoes, red bell peppers, and onions, pour it into a tomato paste oil mixture, and add water or even sometimes chicken stock for extra flavor. Add your preferred seasonings then add rice that has already been washed. Cover and within 30-45 minutes you should have Jollof rice. Of course, this is just how my family does it so there are many different ways but usually, most Jollof dishes follow this basic format.

However, in recent years some brands have come out with their own versions of Jollof rice and some are better than others. A brand called Varo based in the UK has its own version and after reviewing the ingredients it seems like something that won’t taste as good as my mom’s but would still satisfy me enough. But Trader Joe’s decided to join in too and I actually got to taste the rice. And I can confidently say that I will never eat it again and ate 3 spoonfuls before giving up. 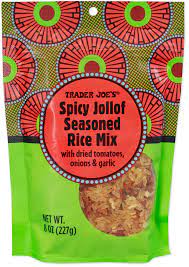 Now going into this I wasn’t expecting much. My friend who is part Nigerian gave me the packet because her mom makes it sometimes. Just by reading the ingredients, I could tell that I wasn’t going to have the best experience. The only things in the packet that would provide notable flavor like salt, pepper, red pepper flakes, and garlic are not very prominent. There was no spice and to me it almost tasted like plain white rice. Because I knew I didn’t like what I tasted at all I decided to torture my family along with me and get their reactions.

My brother who knew my mom made actual Jollof rice that day (which I’ll get into later) was expecting me to give him my mom’s rice. When he tasted the Trader Joe’s version he wasn’t very pleased, to say the least. I, of course, had to give my mom the rice, and the next day she told me to throw away the rice which I think speaks for itself. My dad, who was actually excited about the rice was smiling at first but that faded very quickly. Safe to say no one in my family liked the rice and overall I give it a 2/10. If I told the rest of my family that they would say I’m crazy and need to go into the negatives.

Now I couldn’t taste the Trader Joe’s rice and only go off the memory of my mom’s rice so when she made Jollof that day I also had to make the packet of Jollof. My mom’s Jollof did not disappoint, unlike the abomination that is Trader Joe’s version. There was a perfect balance of the sweetness the tomatoes and bell peppers give off but also the spiciness of the scotch bonnet peppers. But for some reason, my mom decided to add black beans to it which was a bit different but didn’t alter the taste too much. My final score is an 8/10. It would be a 10/10 if there were no black beans.

Throughout the years more and more big grocery stores have been catering to minority audiences and the food they typically eat. They take random foods and insert ethnicity-style them. You would see Chinese-style tacos and Mexican-style beef stew, all in an attempt to appeal to more audiences. When people don’t see their culture in western media for so long and they can finally get to see something that includes them they want to watch or test it out as soon as possible. This can be said for something like the packet of Jollof rice. It’s not only to appeal to the people of that culture but also to people outside it.

Many grocery stores know that there’s a market for these types of food. Premade, quick, and easy. If this could work for decades with stuff like box macaroni and cheese and frozen dinners which is just American food, it can also work with ethnic foods. With the rise of social media to promote these different types of foods, it’s no wonder big grocery store chains will pick up on the trend too. It’s even written in the description for the Jollof rice packet to try their version of Jollof rice before you can go out and explore authentic Jollof. They want you to buy from them before you buy from someone else. Because if someone actually likes a big name store’s version of cultural food and thinks it’s authentic then they’ll buy more from there and not support smaller cooks who know how to make the actual dish. This is a rinse and repeat cycle. People with much more influence see the benefit in a market that has millions of people just waiting for someone or something to have exactly what they in a convenient way and then the money starts rolling in.

I’ve grown up on my mom’s and aunts Jollof but others haven’t even heard of the dish. Why waste your time trying to find a place that makes the dish you’re looking for when a place has a price that is most likely cheaper and much more suitable for their needs? Because like always people would rather go support the big guys rather than help out the people left in the dust.